Sorry my posts have dropped off for a while, been so very busy, however in amongst some of the "proper" work I have managed to get some interesting projects in the shop! Here's one of them, Emma I's replacement Emma II has finally received her necessary makeover, seen here sporting her safari style look with the old homemade roof rack... I'll post some more odd projects in the coming weeks, ....... 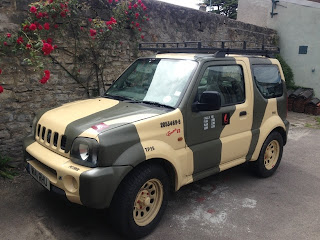 The Carpenter.
Posted by Manbench Industries at 21:03 No comments:

I recently acquired this Wilesco D21 from eBay for a very reasonable 39 quid! It needed some work to get it back into working order which I think is what put people off. The D21 is the only model in the current Wilesco range that is fitted with a boiler feed pump which allows continuous running of the engine with the boiler topped up during operation. The majority of the pump components were missing along with the chimney and the boiler bushes for the whistle and pressure gauge had been pulled out. 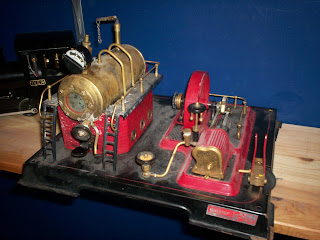 The Wilesco D21 as it arrived.

I spent an hour the other day disassembling the engine into it's component parts. I soldered the boiler bushes back into the boiler and all seems to be sound there. Upon disassembly I noticed the paint was in slightly worse condition than I initially thought so I decided that I had may as well repaint it before putting it together. I don't like painting. Which means this project will probably take longer than planned! Here it is after disassembly, but prior to the removal of some of the paint. 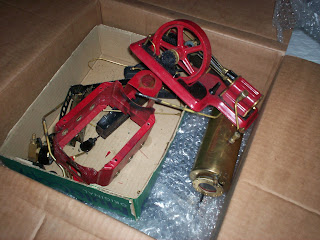 Posted by Manbench Industries at 14:38 No comments: