Just a quick one today! My parents often say I'm a tad OCD...I don't think much of it until I find something like this in my room... 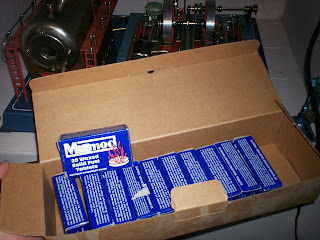 11 empty boxes of Mamod solid fuel...nothing weird about that right?

The Engineer.
Posted by Manbench Industries at 18:34 No comments:

This post seemed to have got lost down the draft list and have only just found it again - so I am posting it now to put this thrilling two part saga to bed...

As expected, I just ran ahead with this project without taking photos...sort of defeats the object of a blog, but still! It was a nice little quick build when I couldn't be bothered to get too involved in a proper project! Just fill up the box with a load of coins and put a marble on the launch sling and it fires it about 20 feet!

The observant among you may notice we've changed the font this post is written in - it was recommended that the font we used was at times difficult to read so have changed to this. If we get time, we'll go back through and edit the old posts... 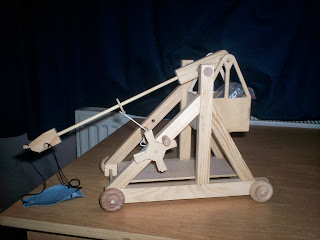 Posted by Manbench Industries at 12:14 No comments:

An interesting little story from this years Dorset Steam fair, this charming print of a gypsy woman was found in a bin on the last day, well when 'twas found it was a little more grubby and had only a white surround. Anyhow somehow I was drawn to it so I thought I'd nab it.

It was only when home a few weeks later I thought I'd clean her up and take her out of the frame for refinishing that I discovered that her white surround was actually the reverse of an early hand painted advertising sign for what looks like a removal and piano moving company. Looks to be f.baker, or possibly raker based at a 3 manor road, anyhow if anyone has any information on the company I'd love to know more.

Anyhow it seemed a shame to leave this hidden so I decided to use the front as the surround which gives the print quite a distinctive standout look in my opinion. I'll clean up the frame and eventually adorn my wall with this distinctive piece! 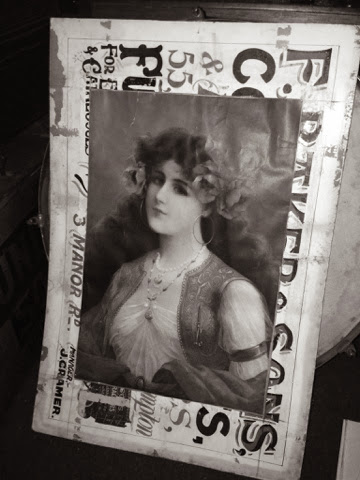 Posted by Manbench Industries at 21:49 No comments:

Doesn't need much explaining here - an exhibition, about garden railways in Exeter....

I went along on Saturday for the day with a couple of friends with their toy steam exhibits at this show. The show is one of the highlights on the Garden Railway calender and on top of that, all the money raised by the organisers goes to the Devon Air Ambulance Trust. The show consists of a large number of layouts in all the common scales - 16mm, 7/8", G1, as well as toy steam exhibits and a large selection of traders.

I got lucky and bought 12 yards of Peco SM32 track for £25 and a right hand point for £20 allowing some more progress on the railway when I go back at Christmas!

Not much to really say, so I'll just upload a couple of photos here and put the rest on the Flickr account. 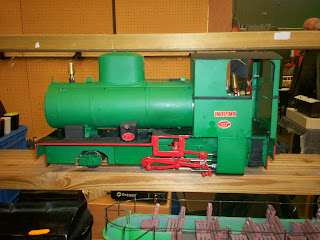 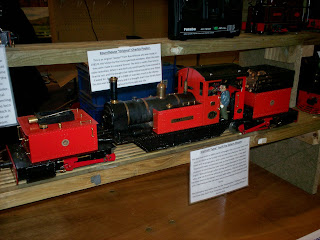 A Salem Garrett - based on Mamod technology...the urge to build one is strong! 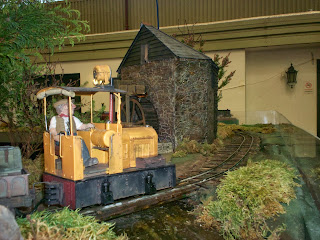 A link to the Exeter Garden Railway Show's website.

The Engineer.
Posted by Manbench Industries at 01:06 No comments:

From the Collection - Hornby Rocket and Coach

I just wanted to show you my Hornby Rocket complete with the coach purchased at the Great Dorset Steam Fair a few weeks ago. The Rocket certainly makes an impressive model - would like another coach just to add to this!

The engine made for a very unusual toy - being quite an advanced for the market at the time, with a internally fired boiler, a gas burner and fixed cylinders. Extensive use of plastic was made in the model with the track, tender and even the gas tank being made from plastic. After a few years, the plastic gas tank would go brittle often leading to leaks and fire damaged tenders.

The track is in interesting design made up from small sections shaped like a straightened out 'Z'. One 'leg' of each 'Z' is longer than the other, meaning when joined in an opposing pattern, a straight section of track is produced but when placed together produce a curved shape to the track.

It was a shame the model never took off and the range continued, I read somewhere that there were plans afoot to produce the entire set of entrants for the Rainhill Trials - how on earth they'd have got a horse suitable for 3 1/2" gauge to power Brandreth's 'Cycloped' I do not know! 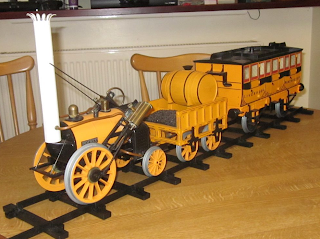 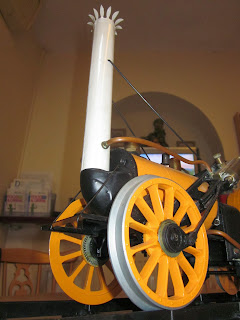 Must have been quite something in 1829.

Posted by Manbench Industries at 18:17 No comments:

Assembly of the Deans' Bioscope Show

Every year, we spend a fortnight at the Great Dorset Steam Fair with The Carpenter's family Bioscope show. For those of you that don't know, the Bioscope was a portable cinema that was taken to fairs to show the then new moving pictures and was the predecessor to the permanent cinema. The show consisted of an elaborate decorated front with a fairground organ and a stage on which free shows were put on to draw the crowds who were then charged to watch a series of films at the rear of the show. During the assembly of the stage, I tried to take a photo of each step from roughly the same place to try and piece together a video of the construction process.


An image of the completed show... 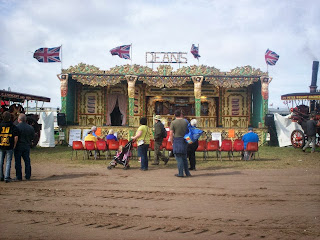 From the Collection - The Cornish Maid

As I am quite busy with university, the progression of projects has slowed, so I shall inter space those posts with an insight into some of the more interesting aspects of my collection, starting with this lovely model traction engine, 'The Cornish Maid'. I was given this engine by a friend of mine several years ago now, along with a model of a steam roller powered by a Stuart 10H. I expect this engine was built in the 1950s out of whatever could be found around the place. The wheels are made from sections of steel tube, with tinplate spokes soldered on. The motion-work including full Stephenson's Link valve gear all seems to be handmade without a lathe, but everything runs beautifully on a few pounds of compressed air. The flywheel seems to be made from a sewing machine flywheel and the boiler from an old shell case. When I was given it, I was inclined to rebuild it, but, after running it I think it looks far more interesting like this. 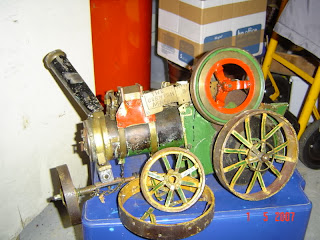 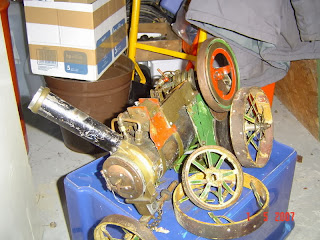 
Posted by Manbench Industries at 15:11 2 comments:

Another old project this one - built in a similar style to my steam generating plant shown on here before. It is a steam powered workshop using Wilesco accessories powered by a Stuart Turner 10V and #500 boiler. The two level line shaft was built to transmit the drive to all of the tools. The engine, line shaft and tools are mounted on one board, with the rear set of tools raised on a plinth at the back. The boiler is mounted on a separate board and is removable in order to make the model easier to transport. 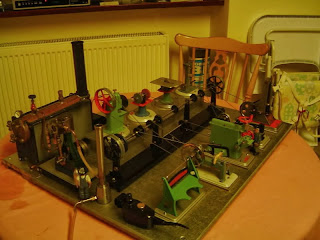 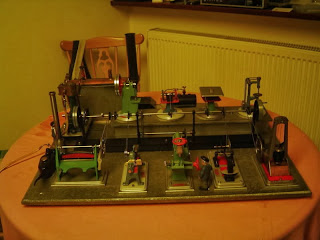 Posted by Manbench Industries at 22:51 No comments:

This title may be misleading; I'm not building some sort of honeywine fuelled robot, although that is a fantastic idea, and should we ever do so this will be what its called.

Rather then this is the continuation of that rather addictive hobby (that keen blog readers may note I started a while ago) of mead brewing. I feel my first somewhat crude batch was palatable, however had definite hints of cough syrup flavour. Since then I decided to up my game and after much research and debating (over published contradictions!) have switched to a more complicated recipe, with acid to balance sweetness, and added tannins to bring out the correct flavours. Also a proper yeast nutrient and sulphates!

This switch then was a definite improvement, producing a mead that was apparently, and I quote (somewhat proudly for a complete amateur)  "probably sellable!"

With two "sellable" batches under my wing then the "Original Saucy Badman Mead Co." (a subsidiary of Manbench Industries) have branched out into the creative mead recipe world. I'm pleased to announce the start of production of a "Blackberry Melomel" (Blackberry Mead) "A Braggott" (Ale Mead) and a "Brochet" (a Caramelised Honey Mead.)

I shall let you know how they all turn out in due time! In the meantime heres a sneak peak of one of the labels, the process of making which i find almost as fun as the brewing itself,.... not the drinking though! 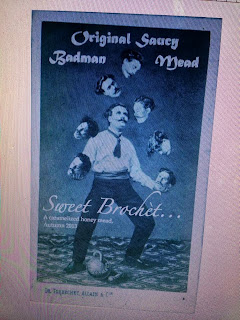 I am a big fan of cranes - indeed, when I have a play with some Meccano I normally end up building some form of winching device, so a few years ago when I saw this model for the bargain price of £15 I just couldn't resist it! It's an old model based upon plans in Model Engineer by LBSC for a basic toy steam crane.

When I bought it it had no jib, but that was easily remedied with a couple of bits of steel and 20 minutes with the milling machine, a hacksaw and a file. Still need to put some supporting struts to stop the jib from moving up and down, but she looks rather smart now. I fancy mounting it on a rotary base and using it on the garden railway - not sure how the scale will match though. 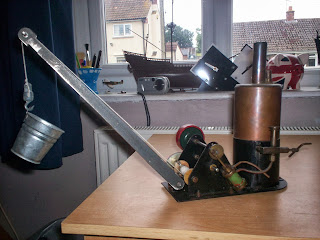 Posted by Manbench Industries at 14:02 No comments: