The Queens Bed, A revolution in pubbing technology! 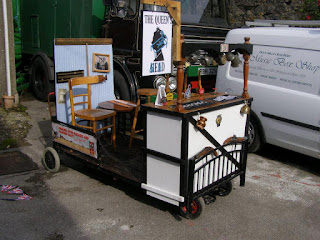 July 2012 saw the completion of perhaps Manbench Industries greatest achievement! "The Queens Bed" our pub themed entry for the Chew Valley Bed Race. Complete with solid wooden floor, working pumps, wine cellar, peanuts and pork scratchings as well as all sorts of other pub paraphernalia. All built using whatever we could salvage from our respective workshops, homes and local skips, which really when we consider it are all the same thing! Manbench Industries collected money for Cancer Research UK raising a not inconsiderable sum!

MBI.
Posted by Manbench Industries at 00:09 No comments:

Unusual Methods of Clamping: I

Something that causes a lot of distress is the clamping of unusually shaped objects. Here at Manbench Industries, we tend to go for 'cut, glue, assemble then decide how to hold together till glue dries' method of construction which often means interesting methods of clamping are used, using stuff that we can lay our hands on in our immediate vicinity. As and when these unusual methods come up, we'll post them - someone may find them useful!

This photo shows the clamping of a curved section of planking around the back of the tender of a model of an Emmet locomotive. After assembly, the question of clamping came up - this resulted in a piece of pipe being cut in two, a piece of bar put through the middle - pulled into place by the weight of two G-Clamps pulling the bar down and a G-Clamp holding a strip of wood in position to hold the pipes tight against the planks. It worked - yes - but we should have made a jig! 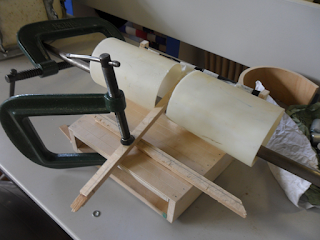 Posted by Manbench Industries at 23:36 No comments:

I want a drink imMEADiatley! 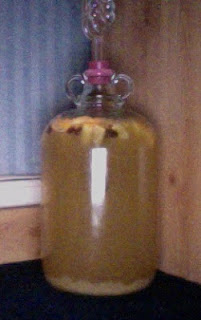 Its a firm belief here at Manbench Industries that one can never have too many skills, brewing Mead is a skill, so why not learn it, .... no arguments? well thats sorted then, time to learn how to brew mead. Ive started with quite a basic 'ancient' recipe, which is a euphemism for 'crude' it seems from what I've learnt from my mead based research. But all signs look promising, day 4 in and things seem to have settled nicely and the bubbling is suggesting its fermenting away nicely. It'll be a good 2 months till we get to try this 'golden nectar' though so it looks like February will be our GLORIOUS MONTH OF MEAD!

The Carpenter.
Posted by Manbench Industries at 11:35 No comments:

Engineers In Unusual Forms Part I

Both of us here at Manbench have great respect for many of the Industrial Heritage broadcasters on Television; Guy Martin, Mark Williams and Adam Hart-Davis to name but a few. I, in particular am very fond of the late, great Fred Dibnah MBE, so I was quite pleased to see a photo of a Fred Dibnah scarecrow my mum had sent me while on a scarecrow trail around the villages in our area.

The scarecrow trail was one of several put up in the local villages to raise money for the  Harvey Hext Appeal. 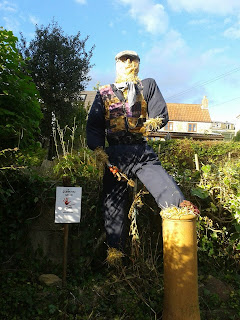 
Posted by Manbench Industries at 11:26 No comments:

Richard Trevithicks 'Catch Me Who Can?' Part II

A further updated of the model of 'Catch Me Who Can?' showing the construction of the engine components used to power the locomotive. The engine was taken from the same Mamod that donated the boiler to the project. To save space, I removed the majority of the frame and silver soldered a brass bush to the remaining section. The bush was then drilled and reamed in the lathe: 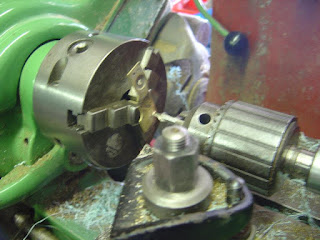 The lathe really needs cleaning up a bit! 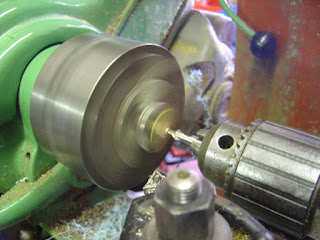 The wheels were pressed off of one of the axles and the axle turned down to accommodate a Meccano gear. A Meccano gear was bushed and drilled to match the crankshaft of the engine. Meccano gears were probably not the best choice for use here, but I had them, so I used them! 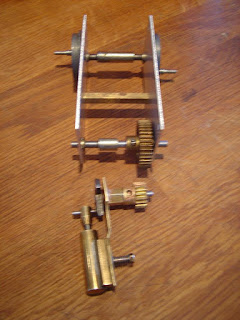 
Posted by Manbench Industries at 23:51 No comments:

This month has seen a change in direction of the type of music I've been writing, November has been a month of jazz really, mainly due to the amount of time spent listening to Gershwin (He's the boy), so heres a sample, a work in progress like most of the posts on this blog but hopefully enjoyable none the less  ....


BH9 by Thomas Von Dean
Posted by Manbench Industries at 19:07 No comments: 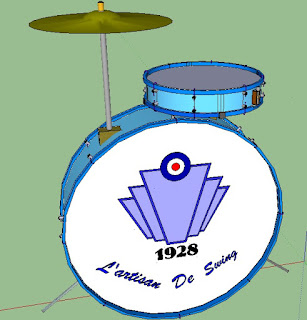 2011/12 saw the production and completion of my scratch built, 1920's themed drum kit "L'artisan De Swing," built as the practical component of my A-Level in product design.  The above image shows a CAD model created half way through production, as with this, and every other project I undertake I never plan!  The CAD files were compiled purely to satisfy the A-Level mark scheme, but the challenge of producing them was relished. The Art Deco style is one which I intend to return to in future projects.

The Carpenter
Posted by Manbench Industries at 16:51 No comments:

Richard Trevithick's 'Catch Me Who Can?'

Here at Manbench, we've always held the work of the great engineer Richard Trevithick in high esteem, Trevithick revolutionized the application of steam to industry and in doing so constructed the first railway locomotive. Unfortunately he achieved little commercial success from his indeavors which included his exhibition loco 'Catch Me Who Can?' shown below: 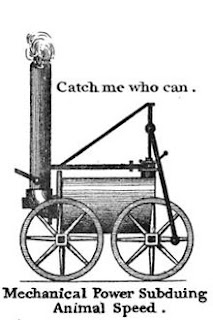 After seeing a 5" gauge model of the locomotive, I quite fancied building a smaller one around about Mamod scale, however as with most ideas it got put to the back of my mind and nothing done about it. However, one day I was going through the spare parts drawer and coming across a spare set of Mamod loco wheels and this happened: 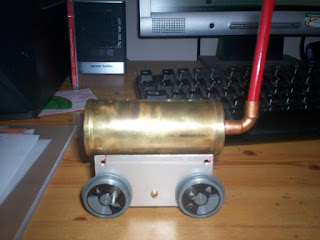 In this photo the locomotive is only a rolling chassis with no engine components inside of it. The boiler was from and old Mamod Minor 1, the frames were milled from some aluminium sheet and the rest was just from bits found in the workshop. The pencil for a chimney is only a temporary feature! Further work has progressed on this since the photo was taken - it's a case of finding the photos! Unfortunately work on this project has slowed down...something about 5 years of university getting in the way!

The Engineer.
Posted by Manbench Industries at 13:19 No comments: 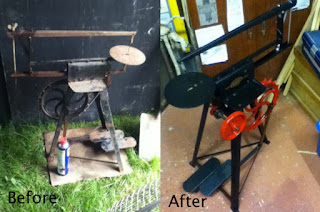 As good a place to start as any,....the end of the summer saw a brief interlude before "proper work" had to commence so this was the chosen way to pass the days.  Bought at GDSF 2012 for a mere 20 Squids, we believe this is a 1940's or 50's model. A basic reconditioning, ....complete disassembly and re-finish of all parts. A new belt was fitted as the last had seen some use and was beginning to slip and the decision was made to give the flywheels a tasteful new gloss red finish, .... because its a good rule that if its a flywheel it should be red ;) Back together now and a great little machine, should last another 60 odd years me thinks.

The Carpenter
Posted by Manbench Industries at 00:24 4 comments:

Manbench Industries; Purveyors of general mayhem since 1994, a blog to follow the crazed, possibly deranged, projects of an undergraduate engineer and an apprentice organ builder who have always felt they were born in the wrong age. Follow us as we re-write history, learn lost skills, discover strange new worlds, break things, mend things, make new things and generally find ways of passing the day instead of doing "Proper Work"!

MBI.
Posted by Manbench Industries at 00:15 No comments: