As part of my uni course, we have to complete a two day workshop tutorial, one day on manual machines, the other on CNC machines. The view taken by the uni is to get an 'experience of the people we will manage do', personally, I think it is far more important than that, and that a manager shouldn't be given the job until he has spent a decent amount of time in each section of the works.

Anyway, we had to construct this bearing puller - it's quite a smart little project I feel. The tolerances it had to be made were within +/- 0.5mm - so quite a bit of margin for mistakes there! The main body was made on a big CNC Bridgeport milling machine which was quite a smart piece of kit...could squeeze one into my workshop I am sure! It was a very enjoyable couple of days to spend in a workshop full of old Bridgeport milling machines and old Colchester lathes getting my hands dirty as a distraction from all the mathematics and materials science I'd been doing! 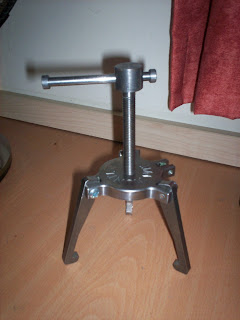 
Posted by Manbench Industries at 13:52 No comments:

Some uni work again! Recently, as part of our Mechanics module (Newton's Laws and all that) we were set the task of building a small car powered by a mouse trap to traverse a distance of 5m as fast as possible. Each car was to be built out of 3mm MDF and powered by a spring from a standard mouse trap given to us - everything else was up to us. With CAD software and the laser cutter available, it was decided to take advantage of this, making everything in 3D, assembling it and then laser cutting the wooden components. Little work was actually needed to make the car - cheating I know, but c'est la vie! 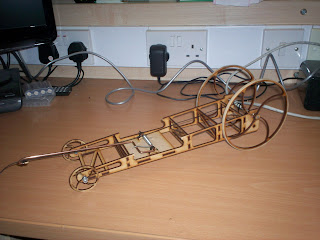 Anyway, a 5m track was laid out, with a light sensor at each end, these were connected to a computer and were used for measuring the time taken to traverse the track. A computer program was set up to calculate the minimum time a car should take to run the 5m based on the weight of each car and the engine stored in a control spring...this showed quite a considerable fluctuation in the spring constant of the supposedly identical springs!

Anyway, after this, using various bits of data from the test, and other assumptions made, a set of calculations had to be done to calculate velocities, accelerations and times for the movement of the car. I did these calculations using Excel, with which you are able to produce a rather snazzy spreadsheet where changing one piece of data such as the weight of the car, alters everything!

By the way, after hating Excel for the last 18 years of my life, I have discovered the joy of these snazzy spreadsheets and have introduced The Carpenter to them, who now uses them for calculating information for organ building. 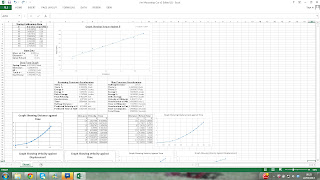 Posted by Manbench Industries at 00:27 No comments:

Bass-ically i finally got back to my own work!

Well its been a hectic past couple of weeks with "proper" workload so I haven't posted much, still today whilst playing my somewhat beaten up semi restored double bass, I decided I needed to get back on with its restoration. So I cut some pine strips to re make the missing (broken off) decorative beading on its edge. I also worked some glue into a body crack to stop further propagation.

I cut some pine to match the body thin enough to bend to the required curve, and glued them into place holding them down with a few dress makers pins, a useful asset for this sort of work. Once thats dry i'll slowly work the it back to a matching bead and it should look nice again!

The bass itself is probably about thirty years old, it was my teachers old school bass and has been through the wars! I recognise it'll never be a Stradivari example but a little work and it should be a charming example showing its war wounds but with an aged dignity. 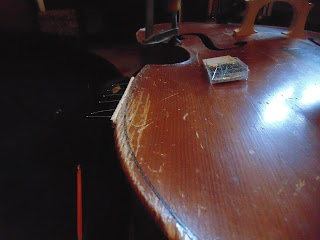 Posted by Manbench Industries at 21:11 No comments:

With all this eco-waffle you keep hearing about, the term micro-generation pops up quite a lot, but I don't think something quite of this scale is what is meant! Something here we didn't make, but I thought would be interesting to post none the less - it's a 'Ministeam' generating plant manufactured by Lutz Heischler in Germany. I picked this up, missing it's crank pin and piston for £7 at Steam Toys In Action 2013 up in Leicester. I got onto my good friend Phil at Forest Classics who sorted those bits out for me, and while I was at home the other weekend, I assembled it and tried it out. I was pleasantly surprised by it's impressive performance. 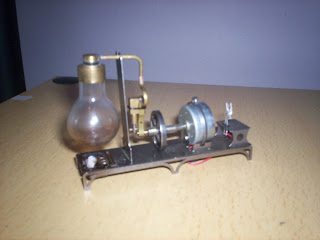 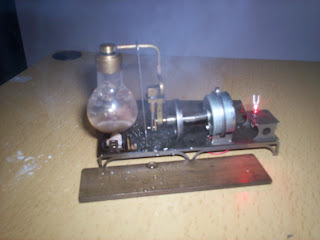 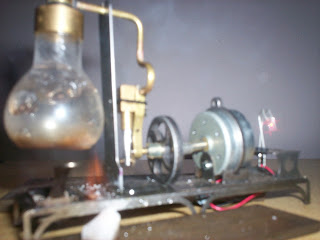 Posted by Manbench Industries at 14:38 No comments:

I took the Stirling engine home for the weekend do do a bit of work on it. I planned to make the displacer cylinder and piston, which I got done but also managed to get a few more bits done including assembly of the crankshaft support assembly.

The displacer cylinder was made from an old sump syringe that I cut in half, the base is from an old brass plate I had in the scrap box, I think it looks rather smart, the firebox will be built up under this. The displacer piston is made from some 2" diameter brass tubing I picked up at a car-boot sale. Everything is silver soldered together, which was made far easier by my new larger gas torch which I use to pile heat into the whole component, using my smaller one to focus on the specific area of the job. 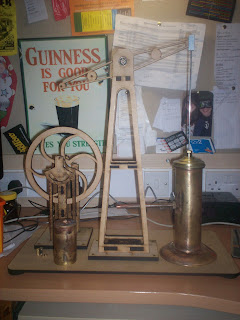 Posted by Manbench Industries at 19:41 No comments: